March , Run for your rods it’s over 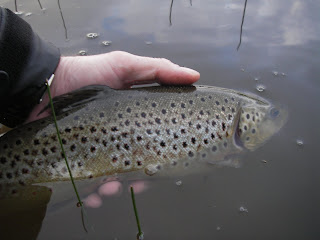 Hooray!!! Its finally here, my real fishing season that is, as in my part of this Island of Ireland the game angling season begins on the first day of March. I feel that I’m starting to come alive again like some woodland creature coming out of hibernation, as dedicated fly anglers we have survived the dark days of winter, we have endured the deadly cabin fever, some of us may have even suffered particularly badly and even fell prey to mind numbing daytime television and we may also even resorted to things that so called normal folk would do, working most days, house work, decorating and even washing the car from time to time, to try and take our minds off casting to a trout or salmon in a beautiful shining stream or wild Irish lough, but now we feel invigorated once again and we run around like frantic mad March hares, we are now busily doing hugely important tasks like sorting out our tackle, cleaning down our fly lines, fixing or replacing leaky waders, taking our fly rods out of storage, checking their rings or line guides and perhaps most importantly dressing wonderful flies to restock our fly boxes and grace our leaders and hopefully take us a fish or two in the coming season .
OK I know I may be exaggerating just a little bit, I know a lot of us now fish in the winter for rainbow trout at stocked fisheries and some off the salmon rivers have been opened in Ireland in January and February and perhaps some of us may have also been out in search of pike, which is becoming ever popular over the winter months with the fly rod and I know some of us may have even been fortunate enough to have even done some angling in a far of land ( infact I will Be fishing in B.C Canada) and all these parts to our sport can be great, but as local anglers we now have many more options as rivers and lakes open and winter starts to loosen its cold grip and spring pushes in , we will even feel like going fishing once more. Now here are three flies that will do very well in the coming months, I hope you will dress a few. 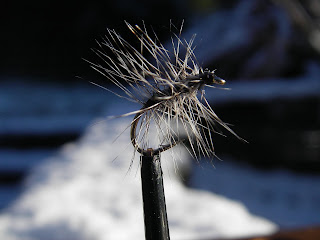 The Griffith’s Gnat
Hook: size 14 -26 (any fine wire fly hook)
Thread: 12/0 black
Body: Peacock herl
Hackle: Grizzle (genetic capes are best for this fly)
Tying tip: Start your thread and wind back to the bend. Prepare a grizzle hackle feather and tye it in. I add a drop of diluted head cement too the tye-in point, and let dry this stops the hackle pulling out and makes the fly a bit more durable.
The Griffiths Gnat has become a truly classic dry fly pattern that can imitate many of the items that are on a trout’s menu. I love flies with peacock herl in the dressing and this is a great fly that will take trout after trout. This fly was first designed as an emerging or adult midge or as a midge cluster pattern and for me it is a fly that every trout angler should carry in their fly box whether they fish on Stillwater’s, loughs or rivers. The fly was invented by an American fly fishing legend Mr George A. Griffith who to his immense credit was the founder of Trout Unlimited in 1959, which is America's leading trout and salmon conservation organization that does fantastic work, and now has over 140000 members. The Griffiths Gnat’s beauty also lies in its use of simple and common fly tying materials to produce one of the world's most effective dry flies. This fly will work right though the season at any time when trout are feeding on small insects, it’s a must have pattern. 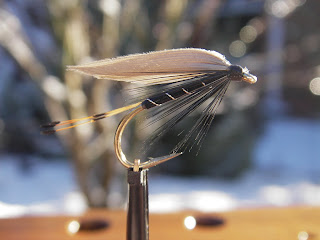 The Blae and Black is a very old pattern and a fantastic one, in my research of this fly I have not found a date, most books suggest it’s a fly of Scottish origin and some tell me it is linked to another truly great old fly the Black Pennell, if this is true and it seems likely as its almost the same as the Pennell but with a blae wing, it makes the fly Edwardian and most likely devised by an English man, Mr H. Cholmondely Pennell, who was a well to do angler that spent much of his life fishing in northern Europe and wintering on the French Riviera ( Lucky man ). The Blae and Black is a very good choice early in the season if lough fishing at duck fly time, I will sometimes dress it with jungle cock cheeks for this type of fishing and fish it on the middle or top dropper, the trout most likely take it for an emerging fly . It is not only a lough fly and will also work well on the river and when dressed in its larger sizes it has often worked for salmon, dollaghan and sea trout, so it’s a truly versatile and extremely useful pattern. 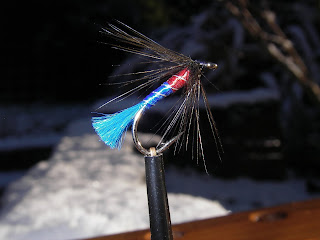 The Camasunary Killer
HOOK – 6 – 12 wet fly or Low water single salmon 10
THREAD – Black
TAIL – Royal Blue Wool or Floss
RIB – Oval Silver tinsel or wire
BODY – In Two Halves, the First Half Royal Blue Wool or floss, the Second Half Red Wool or floss.
HACKLE- Black
The Camasunary killer was first shown to me by a fishing pal of mine Mr Jackie Child, while I was fishing with him on the Rosses loughs in Co. Donegal many years ago, it is a fabulous fly that is named after a fishery on the Isle of Skye, that is off the coast of west Scotland. The fly first appears in a book called ‘Fishing From Afar’ by Stephen Johnson, who interestingly wrote his book in a prisoner of War camp in Germany after his plane was shot down during World war two. The fly has a reputation as a great Seatrout and Salmon fly and appears in another great book John Veniard's ‘A Further Guide to Fly Dressing’ published by A & C Black in 1964, in this it is stated by Peter Dean "It is without any doubt the most successful wet fly I've ever come across. Salmon take it as freely as sea trout, and in small sizes it is an excellent lake pattern, as good in Scotland and Ireland as in the south and west country’, high praise indeed it’s still a very popular fly and a know a lot of anglers who love this fly and for good reason ,I have been told by many that It works very well in the peat stained water of the Connemara fisheries, where it can be fished on the dropper or the point 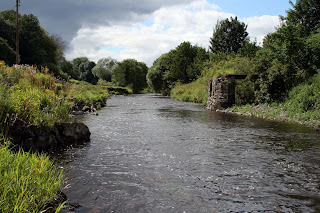