Silver Bullets on the Fly. Mullet the Irish Bone Fish . By Stevie Munn 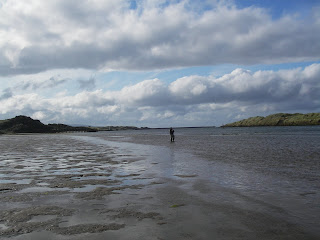 Being a fly fishing fanatic i will cast for any fish as long as i can do it on a fly rod, although there are some fish i love to catch more than others, these are normally species that fight hard or are a challenge or both, if I’m lucky. As a boy I grew up fishing mostly for wild trout and Atlantic salmon as these where the fish my late father who was a very keen angler introduced me to, and they are both still a large and wonderful part of my fly fishing, but when home in Ireland i also now fly fish for Pike and some saltwater species and when on my travels i fish for Pacific salmon , steelhead , grayling, wild rainbows, you know the sort of stuff that almost all fly fishing fanatics like to chase, but there is a fish that i now target in the summer months in my native land that has to be one of the best sporting fish on a fly rod ,this fish is fast and strong and there are 100s of places around our coastline that we can fish for them ,it is the Grey Mullet. Now i know Mullet have always thought to have been almost impossible by many anglers to get to take on a fly rod some say you need to lure them by feeding them with bread flake and maggots then fish fly patterns to imitate what you have just fed to them, but this is not the way i like to fish although I’m not knocking anyone that does it , it’s just i don’t want to carry maggots and as for bread it makes me ill so I’m on a strict wheat free diet ,i don’t even like being near the stuff. So when i go fly fishing i like to travel light, it’s one of the things i adore about fly fishing all i want to take is my rod, reel and a box of flies, that’s about it I’m not bringing bait boxes and the contents of the nearest bloody bakery. 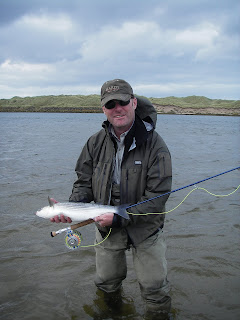 Now if you talk to anyone who has actually caught a mullet on a fly rod they will all tell you they are great fighters but talk to anyone who has been lucky enough to have fished for tropical bone fish in somewhere like Mexico or Cuba and has also been fortunate to have caught a mullet on a fly rod , they will tell you that mullet reminded them of the legendry ghost of the salt flats as they speed off ripping backing from your reel, and for this reason Mullet are often called in my part of the world called the Irish bone fish dew to being a speed king and silver bullet of a fish and one well worth fishing for and like the Bone fish in shallow water there is not many fish faster than them , so when i was asked few years ago by fellow casting instructor Leslie Holmes to come fish with him for them, i simply jumped at the chance as i knew Leslie is an angler that catches these fish on a very regular bases. Leslie lives on the North Coast of Northern Ireland where the River Bann renowned for its Salmon flows to the sea at Castlerock, the locals know this spot as the bar mouth, it is a huge estuary and i could not wait to fish it. When i arrived there i asked Leslie how he started to target Mullet he told me, it was while fishing at the Bar Mouth for Seatrout many years ago he often noticed very large shoals of Mullet cruising the margins in the estuary as the tide filled, which he tended to ignore other than having the occasional throw at them with his sea trout patterns but never having any luck with them he always gave up and went back to fishing for Seatrout. Then on a number of days Leslie made a point of walking the estuary as the tide filled, with no rod, solely to observe shoals of Mullet as they had begun to intrigue him . He then noticed that there was always a number of fish in front or to the rear of the main shoal. As the front runners moved up the shoreline in approximately 6 to 8 inches of water it became obvious that there was a sprinkling effect on the surface, seconds before an eruption of fish broke through the top of the water. This was one of those chance discoveries, as the conditions were extremely hot with not even a whisper of a breeze on the water, so Leslie was able to study these fish , he then returned home to give them some thought , where they chasing sand eels or small fry? They were definitely chasing something! He went through all his fly boxes and found some sand eel patterns and threw them into a salmon fly box which had a few other flies in it and grabbed a 9 weight rod which he used for Bass and got into the car and went back to the estuary. 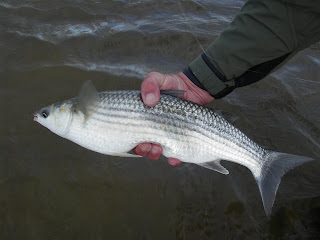 He then went up the shore with a small sand eel pattern on, seen fish approaching, covered the front runner, and hooked the mullet but straight away the fish got off! This happened a dozen times. He then kept cutting the sand eel pattern tail back, and then the savage takes stopped. Exasperated he couldn't work out what was happening. Then for the hell of it, he did something strange he put on a small salmon Irish fly a size 16 Orange and Gold shrimp pattern. Fly on!! Shoal approaching, front runners pushing stuff up, covered with the little salmon fly, long straight draw on line and bang!!!! The rod practically got wrenched from his hand and off the fish went like a speed train , full fly line out through the top eye, backing screaming off the reel, blood flowing from his line finger, 80yards backing gone. Then the silver missile decides to turn and head back at him, and he is now running backwards to keep the tension on the fish. Eventually 15 minutes later a 6.5lb silver grey power house slips into the net, with the Currys red shrimp stuck in the side of a car tyre of a lip. So Leslie had cracked it but was it a fluke, so he sat down, shook for while and watched another pod moving towards him. Could it work again only one way to find out? He did exactly the same as before and BANG similar fight, HAPPY DAYS!!! 15 mins later 3lb Mullet lay in the net. (So the 1st one was not a fluke) Time to change the fly, just to see? On goes another Irish Salmon fly this time a size 16 Foxford Shrimp and another 4 fish in the net, the last one he dispatched to eat and also to check the stomach contents. Yes you guessed it, it was crammed full of sand shrimp!!! These were the little things sprinkling or fleeing the mighty Mullet. Since that day roughly six years ago Leslie has landed hundreds of Mullet with this method and now his secret was out. 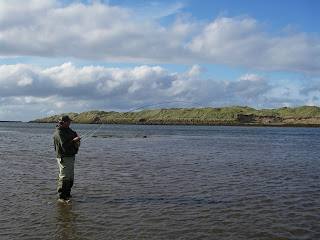 Now it was my turn to fish for them, i had like most kids that fished growing up on Belfast’s Shore Road fished at times for Mullet in Belfast Lough with very little success, so i wanted to put Leslies tactics in to good practise and i did landing 3 great fish in my first outing with him all on small salmon flies and they all fought like express trains just fantastic sport on a fly rod. I have also caught them since then on small brown flies in very calm water, simple trout flies like the hares ear sometimes work, but i must admit the small salmon flies on size 16 and 14 hooks work so well i keep going back to them and it’s my belief that this tactic triggers a response similar to the behaviour of Daphnia feeding trout or at times pulling a small lure though Caenis feeding trout, they just can’t seem to help themselves so they chase and attack your fly , this can be really exciting especially if fishing in perfect Mullet conditions which is in a flat calm then at times just like trout fishing , you get huge bow waves flowing your fly , if this happens don’t slow down keep stripping back at pace and with luck the fish will stop you and then with a Mullet all hell will brake lose as he heads out to sea ripping line from your screaming reel . MAGIC. I now have fished many times for these great fish and am always looking around my coast line for new hot spots they are truly super on the fly rod , get out there and try them.

Myself and Les strongly recommend the use of a 9 foot 8 or 9 weight rod as he has experimented with 6 and 7 weights , with these lighter rods it’s almost impossible to set the hook with, you need something with a bit of backbone. My own preference is a Hardy Zane 9ft 8 or 9 weights with a Zane No 1 reel. Use a saltwater proof large arbour reel with a serious amount of backing attached with a WF 8 Floating line, a Mullet will test your equipment to the limit. Leader material consists of 10 feet of 10 or 12lb Fluorocarbon. Fly selection is dictated by weather conditions the flatter the water the smaller the pattern i.e. 16 for flat calm and 14 to a 12 when there’s ripple or wave on it.. One more tip that will hopefully bring you success is once you feel anything at your line strike as hard as you can, as if your life depended on it you have to set the hook, these fish do not have soft mouths as often heard amongst the angling fraternity. 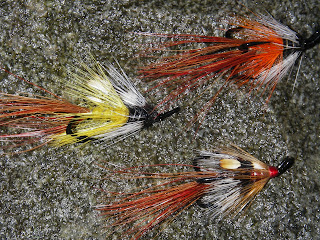 
Info on Guiding for Mullet.

There are good guides in N.Ireland contact Stevie Munn and he can point you in the right direction. Email anglingclassics@aol.com

Leslie Holmes can be contacted on Email info@stonefalls.co.uk for fishing around the Bann estuary. Packages including accommodation can be arranged also Stephen Kennedy is a saltwater guide and runs the Strangford guiding company on Strangford Lough where you can also fish for mullet and Seatrout StrangfordGuidingCo@BTInternet.com 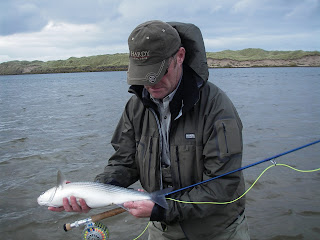 .
Fact File --Stevie Munn has fished many places in the world but grew up fishing on rivers and loughs of Ireland where he now often guides. He is a Hardy Greys Academy indorsed game angling Instructor, and helps run teaching courses in Ireland and hosts trips to Canada, he is a qualified Advanced Professional Game Angling Instructor in Fly Casting (APGAI) and a Association Professional Game Angling Instructor in Fly Tying & Fly Casting (APGAI-Ireland) he can be contacted by email anglingclassics@aol.com or via the web sites www.anglingclassics.co.uk or www.hardyfishing.com
Posted by Stevie Munn at 10:07