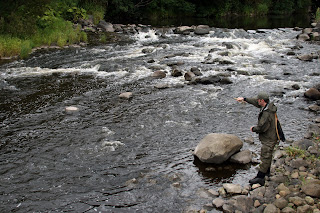 Spiders are a series of fishing flies that originated in the North of England probably in Yorkshire, certainly over 300 years ago, often known as "North Country Spiders, they are soft hackle patterns which are deadly when fished upstream, across or downstream. They represent a fly fishing tradition which goes back many years and they remain in use today because they are so effective when fished in the correct way. These flies are constantly in use on rivers throughout the UK and Ireland and they are effective on most trout streams around the world. The origin of these patterns, as with most old fly patterns, is shrouded in the mists of time. Some of the first descriptions were discovered in an 1807 document written by a Yorkshire farmer named John Swarbrick. Due to the popularity winged flies at the time Swarbrick's spiders were used by a few local anglers for many years but as a result never really became popular. It was only during the late nineteenth century, that the spider pattern became a success with the publishing of Mr. T.E. Pritt's classic book, 'Yorkshire trout flies'. There were other exponents of the spider pattern writing at the time but it was Pritt's book that really hit home. Pritt saw that it was almost impossible to imitate an insect perfectly from an aesthetic point of view, but not from that of an impressionistic one, this is something many top fishing flies have in common.
The word "spiders" can be fairly misleading to some as these fly patterns do not actually represent a spider that you may find in your bath or one that spins a web in your garden, but rather they imitate a hatching insects caught in the surface of the river - or in the surface film of a stillwater. They simply got there name from the fact that they have a long webby hackle that when dry looks a bit like the eight long legs of an arachnid. A true North Country Spider should have a fairly short body by modern standards, no longer than from the eye to a point opposite the hook point or just past. The body should also be slim to match that of an insect and as I have said a long webby hackle that consists of one or a maximum of two turns of feather. There are many great spider patterns; the three I list here among my favourites fish them with confidence, they are true classics. 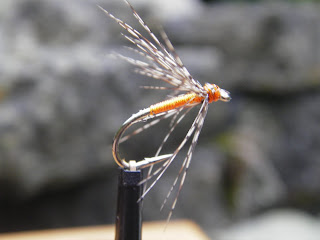 This Fly is one of my favourite spider patterns a truly great fly that can be fished right though the season on rivers for trout, one of my fishing pals Davy Telford rarely has it of his cast when wet fly fishing, It is not only a good fly on rivers as it is also a useful fly at duckfly time on the loughs although then I would suggest you use the floss body one and maybe add Jungle cock cheeks to the fly. Traditionally fished 'upstream and across' or on the swing, and dead drift like the other spider patterns. The fly can be fished on its own or as part of a team; normally I would fish it on the dropper. There is another Orange Partridge pattern, dressed by professional tyer Alice Conba from Ireland, It features a tail made of three strands of bronze mallard flank, as well as a more swept back, fuller hackle collar. This fly becomes much more a standard wet fly in her version and less a North Country Spider and would also be well worth a try, although I must admit the original for me is hard to beat. 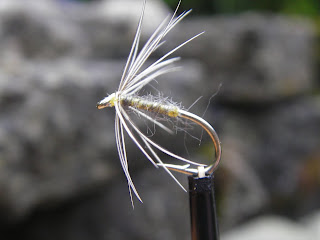 Waterhen Bloa
HOOK: 12 -16
THREAD: Primrose yellow lightly waxed
BODY: Primrose yellow silk lightly dubbed with mole or a mixture of blue rabbit under fur and mole. The silk should shine through the dubbing. Oliver Edwards describes it as a mist of dubbing.
HACKLE: Feather from the marginal coverts of a waterhens wing, or sometime I use blue dun hen hackle.

I love this fly; it’s a true great and fish it a lot on my local rivers. The Waterhen Bloa is a brilliant large dark olive imitation and in the smaller sizes it is also a good blue winged olive imitation, this maybe the reason I like this fly so much as many rivers in Ireland where I grew up fishing have hatches of these beautiful upwing flies and the trout feed on them avidly. It’s also a fly that works on stillwaters like most of the spider patterns. I know many very good and famous river anglers from around the world that rate this fly as one off their personal favourites, to me it is a fly that most anglers fishing anywhere that gets an olive hatch should carry in their fly boxes, simply a great wet fly. 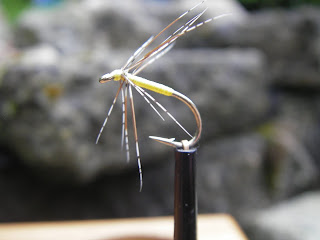 I spent some time thinking what my third choice would be , I very nearly went for the Snipe and Purple , which is a great fly and one I have used and do well with and also toyed with adding the Greenwell Spider which is like all of the greenwell series simply one of the greatest trout flies in the world and I can’t express that enough it is one I use often and my father would not have went fishing without, but I decided to add The Partridge and Yellow as it is a true old spider pattern and is often my choice when the paler olive species are hatching. It imitates a large range of olives and other flies and it’s a fly that I have seen trout move quite a distance to take and it’s like the two other flies I have listed are simply super. 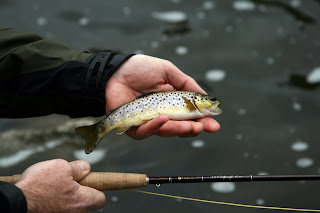