This weekend its the Ireland Angling Show 2012. I will be there , on the casting pool teaching fly casting and giving a try before you buy with Hardy & Greys Tom Doc Sullivan so pop over and say hi and try a rod or get a free casting lesson . 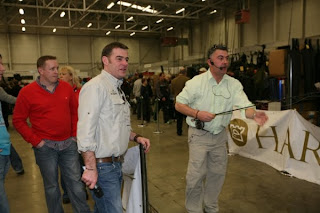 Here is the PR for the show

Mara Media are delighted to unveil a very exciting line up for this years’ Ireland Angling show, which takes place at the National Show Centre in Swords, Co Dublin on the 11th and 12th of February 2012.

The Ireland Angling Show 2012 will cover all aspects of Sea Angling, Game and Coarse fishing with activities and demonstrations to suit both expert and novice anglers alike.

New for 2012 is special guest, John Wilson, who lives in Norfolk beside a Lakeland setting [one of the lakes he created himself] and is naturally a lifetime angler. He has fished in over 60 countries and filmed for television in over 30 of them. Making a total of 150 half hour angling programs, including no less than 17 consecutive yearly series for Anglia Television. Many of these are regularly shown on the Discovery ‘SHED’ channel. John has been writing for over 40 years and has contributed to nearly 90 books on angling, 38 of these being entirely his own works. For 25 years he ran his own tackle shop in Norwich.

In 2010 John was indicted by the IGFA based in Florida USA, into their Hall of Fame. A rare occurrence for a British angler.

With an emphasis on attracting a younger generation to angling we are delighted to welcome Yasmin Morgan aged 13. Yasmin is the UK Open Salmon Distance Champion and Welsh National Pairs Champion.

Yasmin first stepped onto a demonstration platform at the tender age of 2 years and since that day she has been demonstrating with her farther all over the UK in Game and Country Fairs. Having been his assistant for a few years, she has stepped out of his shadow and has competed in casting competitions to gain the title of ‘UK Casting Champion’. She is excited to be coming over to Ireland and can’t wait to share her skills and enthusiasm with everybody.

A designated area hosted by the Dublin Angling Initiative aimed at encouraging youngsters to pick up a rod.

A selection of top fly tying experts from Ireland and the UK will showcase their skills.

A “Meet & Greet” area will be located close to the theatre where visitors can seek advice and chat with their favourite celebrities.

A huge selection of tackle and trade stands will offer products to suit every budget.

Visitor's can also avail of the special offer from Bewley's Airport Hotel, which has rooms from €59 (room only) per night and stay with large contingent of exhibitors, angling celeb's which add's to a great weekend's craic after closing hours. A courtesy bus will run from Bewleys to the exhibition free of charge.

Mara Media would like to thank the angling community for their support throughout 2011 and their continued support in 2012, we are eager to give visitors a value for money, fun filled experience with entertainment and attractions for the whole family.


http://maramedia.ie/whats-on
Posted by Stevie Munn at 08:34